As the daughter of an American sculptor, London-based Corrie Nielsen was fascinated by form and design from a young age. Her move into designer fashion built upon that fascination. She obtained a First Class BA Honours degree in Fashion Design Womenswear from the University of Arts London College, Central Saint Martins. After graduation she worked in bespoke tailoring followed by six years at Vivienne Westwood before launching her own label. Her first collection brought recognition when John Galliano chose Corrie as winner of Fashion Fringe in 2010.

Following the show, she was invited exclusively by Hilary Alexander to create the showpiece for Fashion for the Brave charity fashion gala held on September 20th 2012 in conjunction with the Household Cavalry. The showpiece as well as other Corrie Nielsen pieces were modeled by Jade Parfitt and Jasmine Guiness. Corrie was a patron of 2012 year’s event alongside Sienna Miller, James Blunt, and Jasper Conran.

Also following that first solo show, select pieces from Corrie’s autumn/winter 2012-13 collection were chosen by the Scottish Fashion Awards to appear in all aspects of the show's marketing campaign in the run up to the awards ceremony in June 2012. In addition to that, Corrie was nominated for "Best Use of Scottish Fabric by an International Designer."

Corrie showed for six consecutive seasons on-schedule for LFW. She was then invited by the Chambre Syndicale in Paris to show for Paris Fashion Week and listed in-calendar for the autumn/winter 14 and spring/summer 15 seasons.

Corrie has been described as —  and fulfills the role of — modern couturier and true fashion visionary. 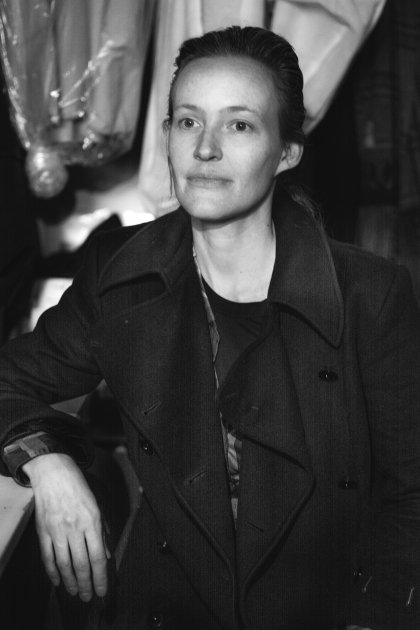 “Corrie Nielsen’s design spirit is surprising in a woman who was born and brought up in America. But maybe it is the wide open spaces and the freedom associated with that country that may have made her clothes such a powerful and challenging statement. The way in which she takes English and European histories and gives them her own unique twist is why her work is so excitingly original.”

Corrie Nielsen serves local and international couture clients from her London studio. For all couture enquiries or to schedule a couture consultation, please submit the form below. 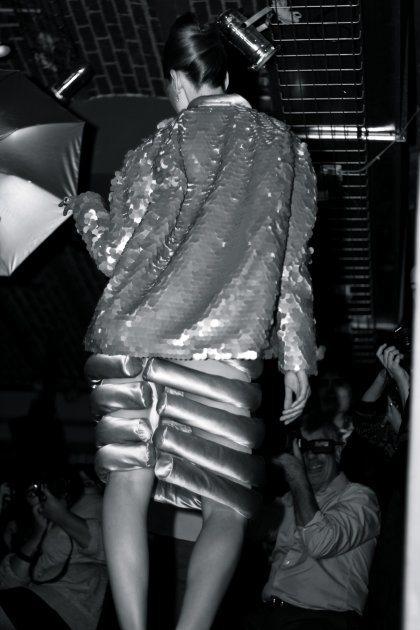 Vivienne Westwood London employs Corrie as a sales representative, and she begins assisting clientele with Gold Label Collections as well as bespoke orders for bridal and special couture.

Corrie is accepted onto an internship as apprentice dressmaker for Vivienne Westwood Studio. She works on both the Gold Label Spring/Summer 2003 Collection as well as bespoke Couture, gaining experience as a pattern cutter and machinist.

John Galliano selects Corrie as the winner of the Fashion Fringe 2010 platform established by Colin McDowell.

London's Design Museum exhibition, From Inspiration to Realization, recognizes the distinctive couture style from Corrie's autumn/winter 2011 collection, placing it at the forefront of art and design.

Kelly Roland wears the black silk tulle rigid blouse from the autumn/winter 2011 collection on the X-Factor, telling Glamour magazine, "I wanted something dramatic today. This weekend was all about the avante-garde for me and I loved it!"

Hilary Alexander, OBE invites Corrie to create the 2012 Fashion for the Brave Dress- an annual showpiece designed specifically for one of the country's most important charity fashion galas. Modeled by Jade Parfitt, the dress was the finale piece within a 'Best of British' themed catwalk at the Dorchester Hotel.

The second London Fashion Week on-schedule show receives unprecedented acclaim, resulting in Corrie trending on Twitter with 86,000 tweets relating to the catwalk show, making her the third most talked about person on Twitter in Great Britain that day.

Florence Welch of Florence the Machine wears the Lavalier Blouse on BBC for The Culture Show interview.

Lianne La Havas wears the Le Cigale waistcoat on stage at her performance in Scala.

Corrie is one of 26 Contemporary Fashion Designers chosen to exhibit at the V&A Museum retrospective ‘Balenciaga: Shaping Fashion’ where her Black Calla Lily dress is displayed.

Corrie Nielsen: Why couture is the future of fashion
HARPER'S BAZAAR, JULY 2018

November
The Hunger Games: Catching Fire
Lent garments worn by extras in the party scene at the presidential palace.

20 September
Fashion for the Brave
Selected by Hilary Alexander to create the 2012 Fashion for the Brave dress, an annual showpiece commissioned specifically for one of the country’s most prestigious charity fashion galas. Modeled by Jade Parfitt, the dress was the finale piece within a “Best of British” themed catwalk held at The Dorchester.

11 May
Passion Ball
Selected to celebrate the UK at Singapore’s annual Passion Ball supported by Coutts and Audemar Piguet. Looks from the S/S 2012 collection were exclusively featured in the finale runway show.

May
BT ArtBox
Selected alongside designers Giles Deacon, Philip Treacy, Julien Macdonald, and other various British artists to revamp the iconic London phone box to mark the 25th anniversary of Childline. The BT ArtBox collection was showcased throughout the streets of London as one of the single largest art exhibitions in the capital.

For all business enquiries email: